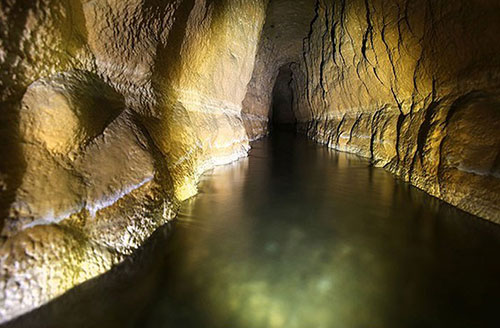 In Persian, called /qanat/ or /kariz/

Most Iran cities have a hot and arid climate, formed based on water supply in response to the harsh weather by providing water systems inside the arid deserts. In the early part of the first millennium BC, Iranians constructed underground water horizontal tunnels on deserts with no water resources for extracting groundwater, called Qanat (in Persian called Kariz). The total length of Iran’s Qanat (about over 37,000 identified qanats) is 350,000 kilometers, approximately equal to the distance between the earth and the moon and 43 times more than the length of the China wall. In 2016, UNESCO inscribed 11 active qanats in Khorasan, Yazd, Markazi, Isfahan, and Kerman provinces with some innovations. Nowadays, these active resources are used for agricultural purposes and local usages.

Qasabeh Qanat, the oldest and deepest qanat in the world

Qasabeh Qanat, known as Kariz-e Kei Khosrow or Gonabad Qanat, is in Khorasan-e Razavi Province, dates to 3-4 centuries BCE. The stepped qanat was built in 33 kilometers, and its mother well is 300m deep. The main water source of Qasabeh Qanat is Siyah-Kuh Mountains.

The history of Baladeh Qanat in Ferdows, Khorasan-e Jonubi, dates to Sassanid Period. The 153 Baladeh wells are still working and runs for 19km with 15 branches.
Zarch Qanat, the longest qanat in the world
Zarch Qanat starts its journey in a Fahraj Village, passes Amir Chakhmagh Complex and Yazd Jame Mosque, and arrives in Zarch. The Zarch Qanat, with 80 km, 90m deep, and 2115 wells, has about 3000 years. Zarch is in Yazd Province, Qanat O Qonot O Qenaat city, and it has circular and square well shafts.
Hasan Abad-e Moshir Qanat, 700 years old qanat
Hasan Abad-e Moshir Qanat, in Mehriz, Yazd Province, runs 40 km with 1330 wells and 5 sub-branches. It irrigates 6 Persian gardens, such as Pahlavanpur Garden (nominated in the world heritage listed). Qanat shared water that getting from Ebrahim Abad Valley between Mehriz, Dehno, and Yazd.

Ebrahim Abad Qanat
Ebrahim Abada Qanat, with 311 wells on the main branch and 2 sub-branches, runs for 11 km. The history of this qanat is related to 1000-1200 CE, which is in Arak, Markazi Province. Haftad Qolleh Heights supply the main source water of Ebrahim Abada Qanat.

Mozd Abad Qanat
Mozd Abad, with rectangular and round 615 wells in Meyme, dates to 2000 years ago. Mozd Abad Qanat is associated with Zoroastrianism as the oldest and largest qanat in Meyme, Esfahan Province. In ancient times, qanats have excavated these aqueducts by hand without modern equipment.

Gohar-riz Qanat
Gogar-riz Qanat, as a dynamic and functional qanat, is in Jupar, Kerman Province. This qanat with 6 branches and 129 well shafts runs for 3560 m.

Qasem Abad Qanat demonstration the survival of the qanat system‘s traditional knowledge
Qasem Abad Qanat, which is in Bam, Kerman Province, is 100 years old. It wasn’t affected by the 2003 Bam earthquake.

There are no leakage spots in Persian Qanats.

Akbar Abad Qanat
Akbar Abad Qanat, with 33 wells and 100 years old, runs 4811m. Although this qanat is in Bam, it was not damaged by the Bam earthquake in 2003.

The qanat’s water clock was the most common object
to calculate the amount of water or time.

An Architecture of the Living History in Iran, Qanat

Well wheels, ropes, Dalo (plastic buckets), pickaxes, small shovels, and lights are equipmentfor digging qanats. The first step in digging Persian qanats is to identify suitable locations with permanent groundwater. Moqani, as a professional qanat worker (digger), discovers the right location according to the previous qanat places or based on nature and his experience. Then, in a dry season, Moqani digs the first well named mother well, and it’s usually the deepest qanat’s well. The second step is calculating the slope and determining the main route. Due to the long length of the qanats and saving the lives of the Moqani, dug wells called by ropes rodes to ventilation, easy removal of soil, and routing in a shorter. In the next step, the qanat workers continue their way in the underground tunnel with a tallow lamp until the qanat is completed.

Qanat system works with the force of gravity and
just drains out the surface of groundwater.

A Leaf from History, a Line of Anthills in the Heart of Iran Deserts

Qajar kings were very interested in qanats. One of the famous Persian proverbs formed in this era based on qanats literally is: ‘It has no water for Haji, but there is bread for you.’ It was narrated Haji Mirza Aqasi, the prime minister of Mohammad Shah, who tried to transfer water from the Karaj River to Tehran by digging qanats. But, the work was postponed because of human Sabotaging. One day he visited qanats lonely with no formalities. Aqasi went near one worker and asked: Did qanat reach the ideal situation (water)? The worker responded: There is no water, Haji Aghasi has forced us to build a nest for pigeons in the well Haji Mirza was upset by this answer. So, he said: ‘There is no water for the employer, but there is the salary for workers!’  The semi-finished work of Haji Mirza Aqasi was completed by Mohammad Reza Pahlavi. Today, the water that flows in Keshavarz Boulevard in Tehran is the water of the Karaj Qanat. 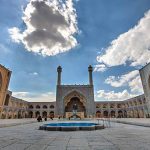 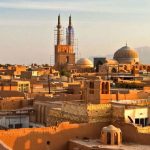