The historic city of Yazd located in the heart of Iran deserts, between the Dasht-e Kavir and the Dasht-e Lut, Esfahan and Kerman, and close the Spice and Silk Roads in Yazd Province. Yazd, as an ancient city, dates to the Achaemenid era. The adobe city has a hot and arid climate. Yazd city formed based on water supply in response to the harsh weather by providing Kariz (Qanat), Abanbar (water cistern), mud-brick houses, Kah-Geli (mud and straw plaster) walls, Badgir (wind catcher), Yakhdan (space for storing ice), traditional Yakhchalas, goudal-baqcheh (kind of garden), sabats (type of roof), gozar, and caravansarais.

Yazd, as the city of windcatchers, is also known for its intangible cultural heritages. Ten percent of Yazd people follow the ancient religion of Zoroastrianism with Zoroastrian language, and others are Muslims who speak Farsi in Yazdi Dialect. The art of Yazd’s people is to transform desert restrictions into life possibilities. Yazd, as the reservoir of Persian culture, transferred high values of Persian culture to future generations. You can see colorful rituals (like Nakhl Gardani), ceremonies, and religious festivals in the city of the social peace of humans. Moreover, Yazd’s handicrafts and cuisine are some of the intangible aspects of the bicycle city. Silk clothes, carpet, and Termeh as Yazd handicrafts and Qottab, Baqlava, Haj-Badam, Halva-ardeh, Lowz, and Keik-Yazdi are the best souvenir of the sweets and candy’s city, Yazd. Because of the rich tourism infrastructure of Yazd, it welcomes tourists with lots of local restaurants, equipment hotels, and traditional houses.

There are many awesome attractions around the historic city of Yazd: Kharanaq, Chak-Chack, Fahraj, Meybod, and Ardakana are calling you. Travel and enjoy them. 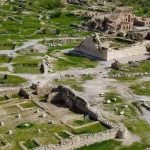