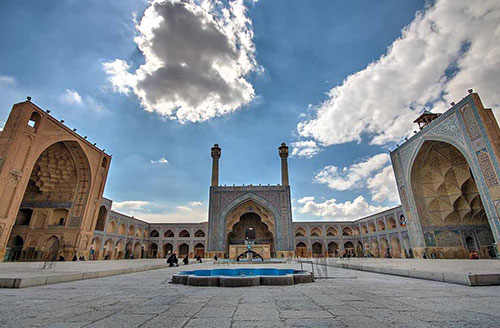 Jame Mosque of Esfahan, also known as Atiq Mosque and Masjed Jameh Isfahan, is the oldest Friday (congregational) mosque in the heart of Iran, Esfahan. As the twelve centuries’ veritable museum, the history of Jame Mosque is not related to a single period. It covers Sassanid, Abbasid, Buyid, Seljuq, Ilkhanid, Muzzafarid, Timurid, and Safavid Periods. So, the mosque’s structure combines architecture in different periods. Masjed Jame Isfahan, as the biggest mosque in Iran (covering over 20,000 square meters), shows the importance of Esfahan City for over 1400 decades, as the Pre-Islamic era. The grand mosque had political, religious, and learning aspects.  Rituals held, Khutba (Sermon) read and said, who is the Amir al-Muminin (the leader). Many great men, such as Ibn Sina, taught in the Jameh Mosque of Isfahan.

The primary monument of the mosque was built by the Bani Tamim tribe on a Jewish Hill (Jo-bare Region) near Historic Bazaar in the 8th century AD, as a columnar Arabic mosque.  Because of finding Sassanid remains under the dome of Taj Al-Mulk, the construction activity on this site is believed back to Sassanid Fire Temple.

The remain of the primary mosque’s sun-dried brick wall hides in the heart of the brick mosque.

The primary mosque was destroyed in the 9th century AD (Abbasid Period), and the mosque was erected in the correct direction of Qibla. In the Buyid period (10th century AD), the mosque surrounded by Buyid precious columns and spans added to the four sides of the current courtyard. Interior and exterior structural conversion of the Seljuq Period (11th and 12th century AD) is the most influential era in the history of Isfahan Jameh Mosque. At first, Nezam al-Molk and Taj al-Molk Domes, Sofe Dervish, Ivan-e Ostad, Ivan-e Shagerd, Seljuk library, Mosala (vast open space for special prayer), and vaulted roofs for free sections added, and twenty-four pillars of the Abbasid mosque removed. The four-iwan (vaulted halls opening into the courtyard) building is considered the most eminent element of Seljuq architecture. In the Seljuq era, the mosque was burnt by the Ismaʿilis in the 12th century and rebuilt by Seljuq in 1121. The Ilkhanid, as a Mongol dynasty, has the least impact by adding two rich decorated altars to the mosque in the 14th century AD. Mozafari School, south portal, and Shabestan-e Mozafari were built in the 14th century AD, during the Mozafari Period. Due to the additional Timurid entrance near the Oljaito altar, many historians believe the nave was Shabestan-e Timurid. Extended prayer spaces, awesome tiles, and restored mosque buildings survive the Timurid Period in the 15th century AD.  The Safavid Era (16th, 17th, and 18th century AD) brought highly visible traces in Esfahan Jameh Mosque decoration and reconstruction. But architectural modification was little. Beit Al-Sheta (a winter nave with special roofs also known as Shabestan Safavid), a big Stone Bowl full of freshwater, blue Iranian pool in the middle of the court (by Shah Abbas’s father), inscriptions Thuluth, Nastaliq, and rigid geometric scripts, Decorations of bricks and tiles of mosque portals, courtyard and iwans, and Safavid altar are related to this period.

The Safavid inscriptions of Shah Tahmasp as
a newspaper adorned the mosque and spoke about
forgiving taxes to Isfahan people.

Compared to the previous eras, the Qajar dynasty has only restoration activities, and their monuments are fewer. Brick platform in the middle of the court, and renovation of the current entrance with its inscription date to the Qajar era, 18th century AD. Following the previous periods, the Jame Mosque of Isfahan underwent regular conservation and repairs. An air attack in the 20th century destroyed some parts of Mozafari Nave. You can find valuable memories in Nastaliq.

It’s interesting to know that one of Hafez’s poems was
corrected by the guidance of carved memories in Isfahan Jame Mosque.

Entrance Gates: Masjede Jameh Esfahan has seven main entrance gates and two additional entrance gates. Each alley has a door for itself.

The first gate, as the newest entrance, is the current entrance gate. Evidence shows it is related to the Safavid period. But during the Qajar period, it was restored with painted clay and Maqeli tile by Sadr-e Isfahani (Minister Fath Ali Shah Qajar). Chains on the door prevent animals such as horses and donkeys from entering the mosque.

The second gate opens in Mozaffari Nave. Unfortunately, the historic door (9th-century door) burnt on the fire in the seventies, and an iron door replaced the old door. Isfahan‘s women believe that they should go to forty holy-place and light candles to meet their wishes. This gate is one of the holy places you can see leaving of wax residue candles.

The third gate, known as Bo Ishaqieh (the uncle of Soltan Bakht Agha) Gate, dates to Seljuq Period. The Kalil Vault is related to Safavid‘s restoration.

The fourth gate, or Dar-dasht Gate, opens to Safavid Nave. You can see Maqeli Tiles and inscriptions in Thulth that date to Safavid Era.

The fifth gate is adorned with painted clay and Maqeli tile. The portal of this gate is related to Safavid Era. All restored in Pahlavi Period.

The seventh gate, or Al-e Mozafar Gate, dates to the 9th century AH. Tile work (Mo-araq tile) is related to Jahan Shah King. The door has the same age as Darb-e Emam Shrine.

The eighth gate is the original and oldest gateway of the Jameh Mosque of Esfahan that dates to the Seljuq Period. The gate has one  Kufic inscription (explained: the restoration started in 515 AH).

The ninth gate is the second additional door named Ashraf-e Afqan Gate. It was built to prevent arguments between Shiites and Sunnis.

Domes: The Jameh Mosque of Isfahan has two mysterious brick domes on the north and the south, date back over 900 years (Seljuk Era). Nezam Al-Molk Dome, as the earliest ribbed double-shelled brick dome, is the masterpiece of dividing Squarespace into a circle. The dome is the oldest and largest dome of Iran in the Islamic Period, in the south. The dome has Kufic inscriptions. Taj Al-Molk Dome, as the oldest double-shelled Nar dome in the Islamic Period, to compete with Khaj-e Nezam Al-Molk was built by Taj Al-Molk, the minister and opponent of Nezam al-Molk. Taj Al-Molk Dome, also known as Khagi Dome, because of its egg-shaped form. The dome is decorated with inscriptions and beautiful tiles. Under the dome tells the story of the Sassanid fire temple in the oldest part of the mosque. You can see the great domes in the naves of Isfahan Jameh Mosque. Each dome tells one story to you!

Naves (Shabestan):   Jameh Mosque of Esfahan has several Shabestan (nave) as a prayer hall. Mozafari Nave is a vaulted hall featuring pillars bombed during Imposed War (Jang-e Tahmili). Also, the effects of the Esmaeilie fire left on a wall. Pillars, vaults, and traditional gypsum chandeliers (date to Safavid Period) in this nave are unique.

There are two Seljuq naves with star vaults and Buyid pillars in Masjed Jame Esfahan. Beit Al-Sheta is another nave of this mosque with Kheimei (like tent) Vault that dates to the Safavid Era. As the roof was a symbol of the sky, you can see awesome ceilings with unique designs in Safavid Nave. The vault of Safavid Nave is known as the live vault museum in 1400 years.

The grid spaces in the Isfahan Jameh Mosque
date to the 1970s.

Altars (Mehrab): Masjed Jameh Esfahan has several Altars. In the heart of the small nave, also known as Uljeitu Mosque, there is a great treasure named Mihrab Oljaito. Oljaito Altar is an exquisite stucco mihrab with floral designs and dense Quranic inscriptions in Kufic and Thulth. The name of Sultan Mohammad Khodabandeh Ilkhan was carved on the altar’s red and yellow bricks by Mohamad Savi, the minister and writer of Sultan Mohammad, in 710 AH. The most beautiful carved wooden pulpit with elegant designs, in the same age and same design as Uljaito Altar, is next to the Uljeitu Altar. The Ilkhanid Mehrab (prayer niche) is located in the roofed corridor of the Eastern entrance. This altar remained unused from Al Mozafar Period.

Porches (Iwans): Jameh Mosque of Esfahan had two iwans at first. But after the fire in 515 AH, the mosque was restored, and two new iwans were added. Iwans are situated in all the cardinal directions.

The body of Ostad (master) Porch or Western Iwan dates to Seljuq Era while its cloth was adorned with beautiful tiles and poem inscriptions that belong to Safavid Era (Shah Soltan Hosein).

Darvish Porch, also known as Northern Iwan, is a Seljuq building with Safavid decoration (Shah Soleiman-e Safavi). On this porch, stucco inscriptions and a unique marble platform were used.

Shagerd Porch (Eastern Iwan) was built after the destruction of the Abbasid mosque. You can see the decorative Muqarnas in this Ivan. Mozafari School, Gav Chah (cow well), Seljuq Dar Al-Hokome, library, Omar Iwan, and entrance platforms are other parts of Esfahan Jameh Mosque. 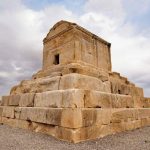