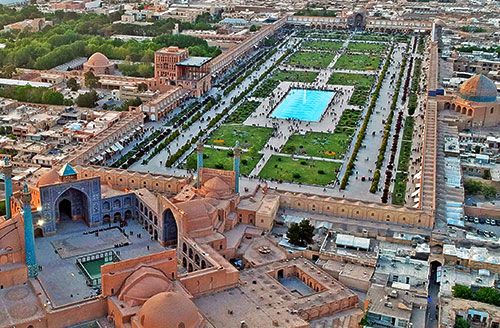 If a time machine could take you anywhere for one day, choose Naqsh-e Jahan (image of the world) Square in the heart of the city of turquoise domes. As you step into Shah Square (king’s Square), you will find yourself in the middle of an old historical movie. An immense Square like a big city with horses on the move, an army parade, royal monuments, and musicians are holding a public concert above the balcony. When you walk to Naqsh-e Jahan Square, you will see all previous Iran’s dynasties.  Chardin, a famous French traveler, wrote that over 50,000 lights are on wooden bases around the magnificent buildings. You cannot see such illumination all around the world.

Naqsh-e Jahan Square is in the center of Esfahan, the cultural capital of Iran. Nasir Khusraw, a prominent Iranian philosopher and traveler, travel to Esfahan in 444 AH. He said: I saw no beautiful city like Esfahan in Persian-speaking areas (present-day Iran). Over 50 caravansaries stood in the Ko-Taraz Alley. And streams passed through the Esfahan’s alleys. King’s Square has 14 main entrances and 14 Subsidiary entrances for people to enter and exit quickly in games and celebrations (which is similar to Rome’s Colosseum).

Square building has a long history in Greater Iran; however, Naqsh-e Jahan Square differs from the others. The rectangular-shaped Square was built by the Great Shah Abbas I, 5th Safavid king, with 525 meters long and 159 meters wide in the early 17th century. Shah Abbas made a new city next to the old city, so the shape, direction, and size of the Square did not damage Al-Buwayh and Seljuk’s compact texture. Chardin said Shah Square is larger than Place de la Concorde in Paris and Saint Peter’s Square in Rome.

The present image of this historical Square, as the heart of the Safavid dynasty, differs from the past. Emam Square was inspired by Persepolis in Fars and imitated from Saheb-Al-Amr Square in Tabriz. Pietro Della Valle, an Italian composer, and author wrote: The Square is covered with small stones and soil suitable for playing polo (Chogan, dates to the Sassanid era), and horse riding. The Square was surrounded by streams and Plane trees. In 1311 AH, a large Persian blue pool was added to Naqsh-e Jahan Square by Reza Shah Pahlavi.

The reason to name this Square, Naqsh-e Jahan, is the Naqsh-e Jahan Garden located in front of the Emarat Mahdi (Mahdi Palace) in the 8th century AH. But this name became Shah Square because of Great Shah Abbas.

Shah Square, with four magnificent buildings on each side, is a multifunctional square: to the west The Ali Qapu Palace as the political symbol, to the north The Qeyssariye Bazar as the economic symbol, to the east The Sheikh Lotfolla Mosque, and to the south The Shah Mosque as the religious symbols. Unfortunately, some of Shah Square’s buildings, such as Emarat-e Khorshid and Emarat-e Sa-at, are not found in the present Square.

We invite you to travel to this royal Square, where all the famous travelers are amazed by its splendor. Dieulafoy, a French archeologist and traveler, wrote about Naqsh-e Jahan Square: Its large size and symmetry are remarkable. It is so exciting that at the end of the 16th- century, in a country where industry and art did not flourish, buildings are better than 17th-century French architecture. 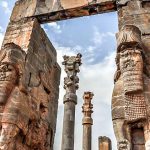