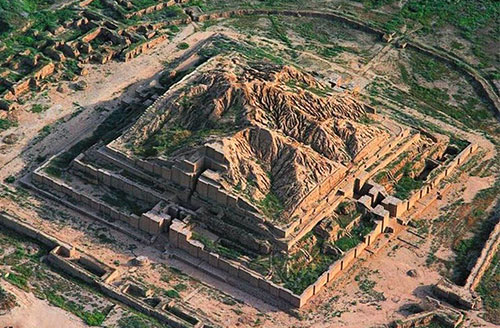 To get an idea of the Iraq Bible’s Tower, travel to Choqa Zanbil. Choqa Zanbil Ziggurat, or Dur-Untash, as one of the best-preserved mudbrick ziggurats globally, is in Susa (shush) Khouzestan Province. This stepped Ziggurat’s history as the ancient world’s masterpiece dates to 1250 BC (about 3300 years ago), Elamite Period.
Thousand Bricks,to Meet with Elamite God

The five-floor Ziggurat with 52 meters high, was founded to honor the great god Inshushinak by the great king of Elam, Untash-Napirisha. Elamites believed that by reaching the top of the Ziggurat, they would be closer to their gods. So, they built this Ziggurat high enough to get the sky and protect the Ziggurat from flooding. But Choqa Zanbil Ziggurat was destroyed during the war between Elamite and Assyrian by the Assyrian king, Ashurbanipal. As written in an inscription: “I broke the ziggurat of Susa, which has glazed bricks, I destroyed the temples of Elam, I turned Susa into the ruin, so the sound of happiness hear from there.” The city was never completed, and this jewelry was hidden under the ground until Roman Grishman’s discovery. Today, there are just two and a half floors of this ancient monument 25 meters high (half its original size).

Hidden jewelry,
under the ground

In the compound word, Choqa Zanbil, Choqa equals hill, and Zanbil equals basket. The shape of this beautiful Ziggurat refers to the overturned basket on the hill. The other name of this monument, Dur-Untash, means the city of Untash, the Elamite’s king.

The architecture of Choqa Zanbil Ziggurat represents Eliamite’s beliefs and art. As the most significant architectural remnant of the Elamite period, this majestic temple is formed by three enormous walls, seven gates, palaces, temples, tomb chambers, tunnels, qanat channels, and a paved courtyard.

The thousands of unused bricks
left at the Choqa Zanbil shown
the city remained unfinished.

Choqa Zanbil is the only Ziggurat that each floor has its foundation. Backed red mudbricks are the primary materials’ building that writings on them are like a brick-wide strip inscribed with cuneiform, the world’s first alphabet. Discovering the Elamite civilization’s objects such as glazed tiles and glass tubes in this temple is a sign of intelligence and human progress. However, the first water purification system and four circular buildings to understand the beginning of the seasons show the outstanding universal value of this city.

The first water purification in the world
located in Choqa Zanbil

The temple was accessedonly to the highest of Elamite’s elite. Even now, you may not climb the stairways, and it remains taboo. If you travel to Choqa Zanbil, look for the Elamite child’s footprint, the sacrifice stone, and an ancient sundial and listen to the wind whisper. It tells you the secret stories of this great pyramid. 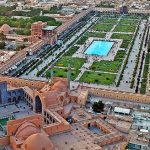